· Remit Consulting’s research shows that the volume of office workers fell, following the announcement of new restrictions in England

The national average levels of office occupancy fell to 20.8% immediately after the announcement by the Prime Minister on Wednesday the 8th of December, in which he announced additional Covid-19 restrictions in England, including the call for people to ‘Work From Home’ if possible. 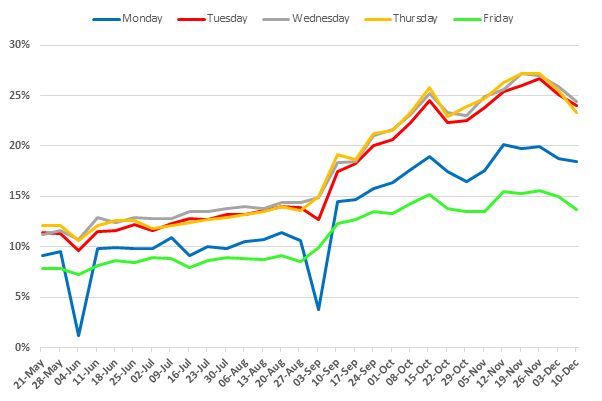 “The government’s announcement brought an immediate and noticeable change to working patterns, with a small fall in the occupancy levels of offices by the following day. This was noteworthy as the pattern so far during the pandemic has been for Thursdays to be as busy as Wednesdays, and sometimes busier. Activity on Friday last week also fell away more than has been usual.” said Lorna Landells of Remit Consulting.

“The weekly fall is a continuation of the pattern seen in the week ending 3rd of December, when the Omicron strain had first been announced as a Covid-19 variant of particular concern to the authorities.

“The weekly figure for the whole of London was at its lowest since the end of October and the weekly average of occupancy levels in the West End fell to 26.0%, over 11 percentage points lower than witnessed only four weeks ago,” she added.

Remit Consulting's findings reflect other published data sources such as transport usage and retail footfall, which also suggest a lower level of activity.