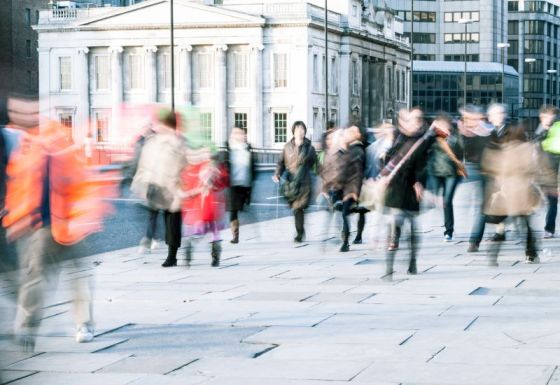 The average number of staff working from the office reached a national daily average of 32.6%, the highest daily average recorded during the pandemic, according to research from Remit Consulting.

“While this is only a small week-on-week increase in the national average number of workers attending the office, it is positive news and, hopefully, a sign of a sustained increase in the return to the workplace,” said Lorna Landells of Remit Consulting.

“While businesses will be hoping this trend continues without interruption, the increasing number of Covid cases being reported is of concern,” she added.

The established pattern of Tuesday, Wednesday, and Thursday seeing the highest occupancy rates continued, with both London’s West End market seeing 57% of staff at their desks on Thursday 13th October. 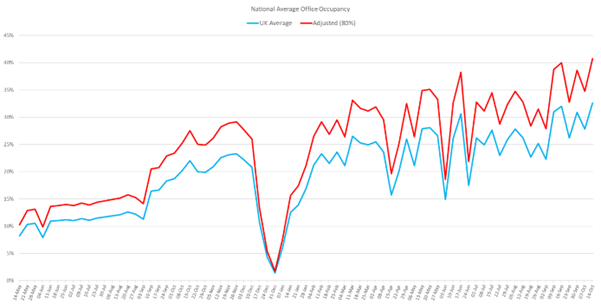 There are diverse views in the property sector regarding what constitutes maximum occupancy for offices, with some industry commentators suggesting that, due to holidays, external meetings, staff sickness and other operational issues, offices were only ever 60-80% ‘full’ before the pandemic.

Previous research from the BCO suggested a figure of 60%, while other market practitioners suggest a figure of between 70% and 80% at peak times in the calendar, although this will have varied widely according to individual buildings and businesses. The graph shows an adjusted figure to compare current figures with a possible pre-pandemic “80% average office occupancy”.

-ends-
About the research
The Return Report is being compiled by Remit Consulting weekly and is based on data provided by building managers from office buildings in major cities around the UK, many in central and prime locations.  The data is obtained from the buildings’ access control systems, providing an overview of the number of staff and visitors entering a property on weekdays.  This is presented as a percentage of the capacity of each building.
For further information, please visit: https://return.remitconsulting.com
Press enquiries:  Andrew Barber: This email address is being protected from spambots. You need JavaScript enabled to view it. +44 (0) 7989 553 903